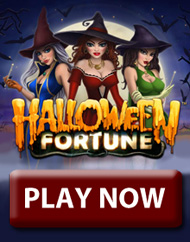 Monster Mayhem and Halloween Fortune are two new slots by RTG and Playtech, released just in time for Halloween 2011. Along with Lucky Witch by Microgaming, that’s three new Halloween themed slots to play this October.

Monster Mayhem is a new RTG slot that features two monsters, Smash and Crash, terrorizing a city. This slot has 50 paylines, wilds, scatters, and a re-spin feature with an increasing multiplier. Smash and Crash are the wild symbols, and they only appear on reels 1 and 5. When they appear on both reels 1 and 5 in the same spin, the re-spin feature is triggered. You can win up to 10 free re-spins with reels 1 and 5 being held where they are, including the wild symbols that triggered the feature. The first spin is multiplied by 1, the second is multiplied by 2, and so on up to the 10th re-spin being multiplied by 10.

Keep in mind, you don’t always get 10 re-spins with this feature. In the limited time I’ve played it, the most I’ve gotten so far is 5 re-spins when triggering the feature. Obviously getting 10 re-spins would have the potential for a very nice win.

Halloween Fortune is a new Playtech slot that features 15 paylines, a wild symbol, scatter symbol, and the Witches Brew Bonus which can award up to 20 free spins and up to a x10 multiplier for those spins. The Witches Brew feature is triggered when the Bonus symbol lands on reels 1 and 5 in the same spin. You are taken to a screen with three sexy witches, choose one of them to reveal your free spins. You are then taken to a screen with the chosen witch and 6 bottles of potions, choose one to reveal your free spin multiplier.

I have had a chance to play both of these slots a little bit, and so far I prefer Halloween Fortune, though I do prefer Playtech slots over RTG slots so that could be the reason. My favorite of all new Halloween releases this year is Lucky Witch by Microgaming, I’m hooked on that one, and have had a few nice wins.

Play Monster Mayhem at these RTG Casinos, and play Halloween Fortune at these Playtech Casinos. 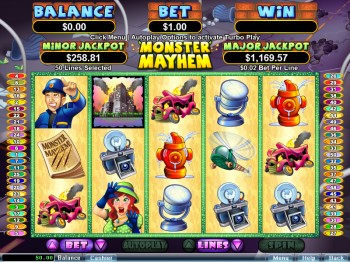 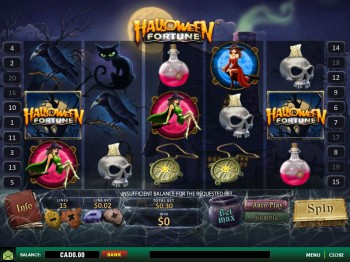