Sparta is a 5-reel 30-payline video slot machine powered by Playtech software. The battle of ancient Greece takes place on the reels in slot machine form. The theme is much like other ancient battle games and is full of features that will help keep you excited about pressing the spin button.

The theme of the game is carried out beyond the reels into the bonus features, the function buttons, and the music. Symbols such as a Catapult, Sword, Triremes Warship, Shield and Urn find their way onto the reels, along with the standard playing card values to complete the slot machine feel.

The highest paying symbol in the game is the Triremes symbol which pays 4,000 coins for five on a payline. This number may seem low in comparison to other games, however Sparta makes up for that with expanding wilds and a free spin bonus feature that pays very well.

Once three or more scatters initiate the feature you will receive 15 free games with a x2 multiplier. The free games may be re-triggered and the expanding wild is active throughout the feature. When the feature starts, before every free spin the wilds will alternate between the middle reels, making every spin a potential winner. For example, on the first free spin the wild will automatically be on reel 2, on the third spin reel 3 and so on. This goes on for the entire time the feature is active. The potentially profitable bonus round is unique and it gives players a new take on the common free spin feature found in most slot machines today.

If you are ready to play Sparta, you can find it at any of these Playtech online casinos. 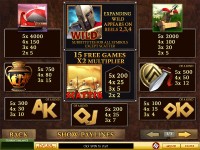 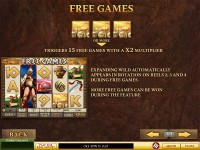 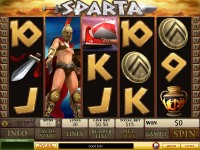