Kong: The 8th Wonder of the World is a new online slot by Playtech, released early in 2011, it is based on the hit 2005 King Kong movie.

King Kong is played in two different modes, Jungle Mode and Big City Mode. The symbols and background change, but the paytable remains the same in both modes. Two different bonus features can be triggered in each mode.

In Jungle Mode, when three or more wild symbols land on the reels, that triggers the Wild Jungle Respins Feature. You are awarded three free respins with additional wilds on the reels. Every time a wild lands on a reel, it remains there until the respin feature is done. This feature cannot be re-triggered, and the Skull Island Bonus can’t be triggered during this feature either.

The Skull Island Bonus is triggered when three or more scatter symbols land on the reels. You are taken to a map of Skull Island with several locations highlighted. Choosing a location reveals one of three creatures, or King Kong. Match three creatures to win a cash prize – each creature is worth a different amount. If you find just one King Kong, you will win the biggest prize. Winning a prize ends the bonus and starts Big City Mode.

The City Tower Bonus is triggered when three or more scatter symbols land on the reels during a spin. You are taken to a screen showing the famous scene of King Kong on the top of the building being attacked by planes. Three times you are faced with three planes, pick one of those planes to take down and win a cash prize. Taking down three planes ends the bonus and starts Jungle Mode.

Play this feature packed slot today at any of these Playtech Casinos. 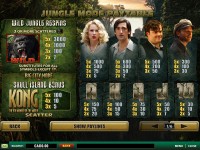 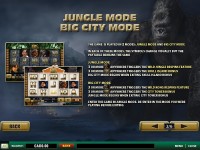 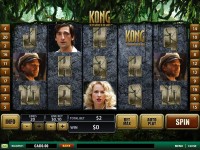