Starburst is an online slot from Net Entertainment, released late in 2012. Though the name promises much, this slot is quite simple in design and theme. It has the traditional gems, bars and red sevens, but the game uses a modern approach and is far from a traditional slot machine. The sound effects and the cosmic background bring an out of this world sensation.

The layout is very simple, with 5-reels and 10-paylines.

The coin sizes range from $0.01 to $1. You can opt to wager 10 coins per line, making the minimum and maximum bet range between $0.10 and $100. An important advantage of this game is the high return of over 96%. As the risk of losing money is low, it is a good fit for all types of players.

The wild appears randomly on the middle three reels and helps you qualify for a good payout. Its property is to substitute any other symbol and trigger the bonus feature.

The Starburst Wild feature is triggered when a wild symbol lands on reel 2, 3, or 4. The wild expands to fill the entire reel and triggers a re-spin after the current win is tallied. If another wild lands during that re-spin, it will also expand to fill the reel and trigger another re-spin with all current wild reels remaining in place. If two wilds land on the same spin, both will expand to fill their reels, but only one re-spin is triggered.

That bonus feature can obviously generate some huge wins. With the three middle reels filled with wilds, you’re guaranteed a nice win… get lucky enough to land Bars on both end reels and you’re laughing all the way to the bank.

I really enjoy playing this game, it was the first slot I played that was created by Net Entertainment. It is amazing to see how such a plain theme can lure you to play more. Maybe one of its greatest plus points is the easiness of winning money. It is true that it lacks in special effects, compared to other games you can find on the market, but it has that special something in its simplicity. It is totally worth it to give it a try.

You can play Starburst at Guts.com Casino (read my review of the casino here). 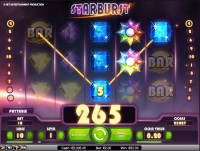 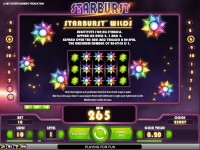