When three of the yin-yang fish scatter symbols land on the reels, you are awarded 20 free spins with all wins doubled. Free spins can be retriggered, but the Tattoo Bonus cannot be triggered within the free spins feature. The symbols are still on the reels, but they just pay as scatters when three or more land during a free spin.

The Tattoo Bonus is a second-screen bonus feature where you select all three tattoo albums displayed to reveal cash prizes. If all three tattoos match, you are given 10 free spins with a x2 multiplier. The woman getting the tattoos isn’t very attractive, they could have done a much better job drawing her up (like the ones on Doctor Doctor, a ‘Sneak-A-Peak’ slot available at Microgaming casinos). Just saying because casinos, and many other companies, usually use sex to sell things, and she’s just not very sexy… lol

The respin feature allows you to spin one reel at a time for an extra weighted bet. It can come in handy at times, but it can also be very costly. I tried it out in free-play like I usually do to create a bit of a strategy for the respin feature. Again I found the best time to use it is when you have many wilds on the reels. Being a 1024 way slot, obviously the more reels that are wild the better. Once I got wilds on the first two reels during a spin, I decided it was a great time to go for some respins. Nothing was really lining up for 5 of a kind due to the 4th reel, so it didn’t cost much at all to keep spinning the last reel until a wild landed. Then the 4th reel became fairly expensive, but wins were coming easy enough to keep spinning until a wild landed again. Now just the middle reel was left without a wild so respinning it was very costly, but the wins were large because every symbol that landed hit for 5 of a kind. To my surprise, a wild landed after just a couple of spins, giving me 5 wilds.

It was fun to try in free-play mode, but I wouldn’t have the guts to spend as much as I was on a respin with real money. You can see the screenshot below of when I lined up the five wilds, and you can see the huge cost of respinning any reel with all those wilds there. The win could have been bigger if there were higher paying symbols on the reels plus the wilds, but that would be a nice win on a regular spin. The fact that it cost so much to respin, only makes that big win a bit higher than bet x 2.

Play Hot Ink now at any of these MG Casinos and remember to be careful with the respin feature. 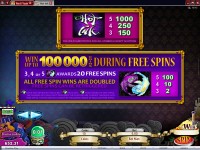 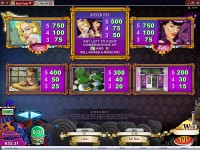 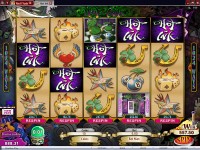